A Japanese once came to India...and mesmerized was returning back...thinking that  he had enough of the royal treatment he wanted during his stay he decided to use the AUTO on his way back to the airport.
On the way, an HONDA overtakes, The Japanese : HONDA-made in japan, veryy faasssttt !"
Next a TOYOTA overtakes, he comments "ahhh !!! THE TOYOTA- Made in japan, comfortable and fasst...!!!" 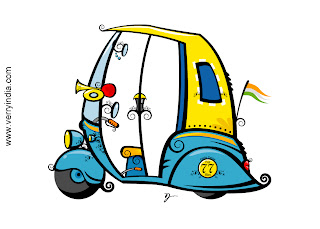 And the list goes on...
He reaches the Airport,
Tintumon: Rs.800 sir.
Japanese : why so much ??
Tintumon : METER - Made in INDIA, SUPER FAST sir ;)
heheheheee, was actually going through the news when I came across a similar story of visitor from some foreign country who was robbed of his possessions in broad daylight and i just remembered this joke so thought to share..
Anyways...has been a busy weekend...  wishing you all a Merry X'mas and a very bright 2012 ahead...spread love,share joy,hug everybody and don't forget to get them back :))
ah, i can count the remaining days on my hand... lolss
Best Wishes and Prayers...signing off...MASALAMA !!!!!!!!!
Save energy if u really think that u should !!!!
Have a Blessed and the last week of this year ahead !!!
Posted by Mingled Minds at 8:31 PM

Your joke is old, but very cute. Brings a smile to my face. :)

he he he indeed made in india.. the pity is they dont put the meter on most of the time :)

Happy new year to you and family and everyone around you..

Have a great year

It's appropriate time to make some plans for the future and it's timе to be happy.
I have rеad thіs post аnd if I coulԁ I ωish to suggest you ѕome intеresting things or adνіcе.


Fеel frеe to surf to my site :: payday loans no credit check

Any suggestions or comments even a tiny - miny would be highly appreciated :D :D

mY dOsE oF CoFfee...